Grandmaster Chu Shong Tin was called the 'King of Siu Nim Tao' by his teacher Ip Man. He spen his life practicing and studying  this form he was able to unlock it's secrets of developing the power of his mind to guide his movements with minimal muscualr effort and to be able to project or express this mind force at will wherever he wanted. and Here is a short clip of  demonstrating his ability to "drop" or rather express the body's mind force, "nim lik", into a short strike 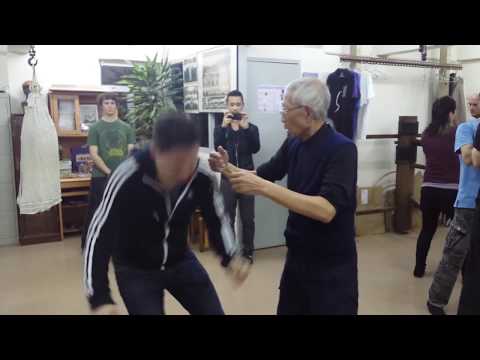 Wing Chun is a system of Kung Fu designed for inner health and simple, practical self-defense. The aim of each Wing Chun practitioner is to ultimately develop a higher level of  mindfulness and effortless power also known as ‘Nim Lik’ or ‘Mind Force’; this is the true essence of Wing Chun Kung Fu. It is quite unfortunate that many other branches of this incredible art miss this point and are stuck in the external mechanical movements of the system rather than also developing the ‘state of mind’ created through developing the ability to use the intention behind each movement. For this reason we feel very privileged that we were exposed to the essence of Wing Chun by Master Chu Shong Tin and his student Master Jim Fung and would like share this unique art with as many people as possible!
Edited with BlogPad Pro