The following is not my work- it is from the Facebook page of my Sisuk Eddie Chan,  IDEAsWingChun

I am reproducing them here to help to spread the Wing Chun knowledge of my Sigung, GM Chu Shong Tin,  to a wider audience. This information is freely available on YouTube & Facebook 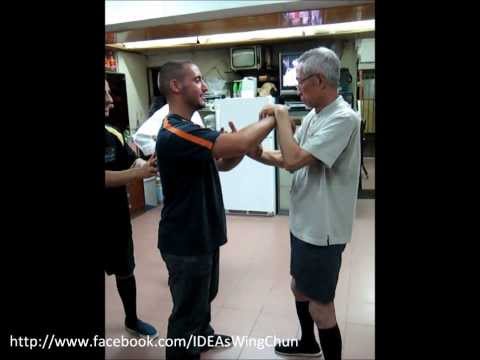 This footage shows transmitting power from one end of a row of people to the other end. When doing so, it is important not to be preoccupied by wanting to push, in the way that you are wanting to move the whole row of people. Instead, it is actually a transmission concept: you are able to send your body power up to the shoulders of the first person, and use them to start the transmission process along the path straight down to the last person.

Someone might think that this can still be achieved by pushing, but pushing abruptly and stopping acutely on the first person to trigger the process. In this way the first person is being “thrown” onto the second, the second onto the third, and so on. While on the surface they look similar, they are in fact not the same. Transmitting basically regards the “path” as continuous and thus the “components” of the path (i.e. the shoulders, the upper backs, and the arms) not breaking apart, although they do break apart, if the sender wants to, when the transmitting power has passed through the contacts between them.

In other demonstrations, Grandmaster Chu controls where the transmitting power stops, i.e. not throughout to the end person. For a row of four, it can stop at the first, or the second, or the third, apart from the fourth person. This will result in the person receiving the stop of the transmission being “compressed” by the transmitting power in the front, and the pushing force from the back. In all these cases, the “path” does not break at all, something unlikely be achieved by abrupt pushing. Why the difference? This topic will come up again but at a remotely later time. You can draw up your own explanations for now.

The power transmission concept and the continuous path idea could be interestingly illustrated by the Newton’s Cradle. But, of course, the latter is not an all-round analogy and thus similarities should not be overdrawn.

What you can read next 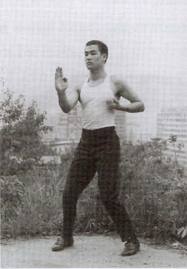